Finally, the much awaited event is less than 12 hours away. After leaving school for 20 years, we're going to gather again tomorrow at Seri Pacific Hotel. There were 93 of us, 60 agreed to attend the dinner, which to me is a success. Ye la, 2/3 of our batch, tu dah boleh undi kalau during AGM... hehe

As one of the committee for the dinner, I'm happy with the progress of our event. It started with just talk among us. Then Roger picked a date, which is tomorrow, and now it's a reality. We started to talk about having a dinner since last year, maybe mid of last year. Punya la lama planning tu..hehe.. Pastu biasa la, cakap, then senyap, then cakap lagi, pastu senyap, until we had our first meeting at Tony Romas Pavillion end of last year. Those yang datang to the meeting tu, automatically jadi AJK. Of course, ada AJK yang non functional, which buatkan aku somehow sakit hati la jugak. But bila dah tua ni, aku kindda malas nak membebel or bermulut laser lagi dah, maka aku pun ambik jalan yang mudah, which is, diam. So far, cuma sorang je la yang non functional, yang lain bertungkus lumus, especially Imi yang asyik kejar dateline and updates je, which without her, maybe this event might not be a success.

I would like to thank the committee members, Normi, Lily, Roger, Imi, Milia, and Yeen for their effort and contribution in making this dinner possible. Thank you to the main sponsors (you know who you are) yang sponsor handbags Coach and few other valuable items. Thank you to everyone yang sponsor prizes for the lucky draw and also thank you to Anne and Ella for the door gifts contribution. Aku tak sabar nak jumpa some of my schoolmates yang dah more than 20 years tak jumpa. I wonder are they as fat as I am now.. hahahha.. jahat betul aku. 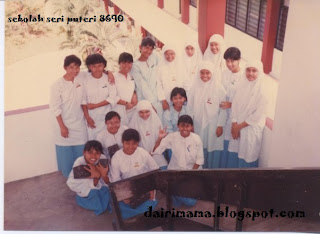 on the way to our classes 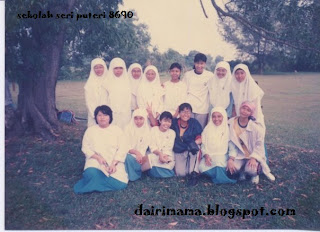 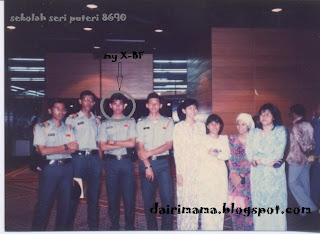 after debate masa form 5. dila, neli, me and june bergambar with our ex-es
Posted by Sizuka at 7:32:00 PM