Do I have to do this?

That's the question that I asked myself every morning. Do I have to exercise?? Argh! 5 months, and we're still exercising every morning without fail except on Sundays or days that we're not well (which is very rare, alhamdulillah). The temptation to eat macam2 tu, toksah cakap la. Huwaaa... rasa nak nangis pun ada. Especially bila tengok my progress yang sangat la slow macam siput tu.

Hubby tried on his polo pants that he bought during his student days and dah boleh masuk. If I'm to try out my jeans during student days, mau boleh masuk kaki je kot. I was so small back then. Seluar baru size 26. Huhuhu... so depressing. Oleh kerana I was so depressed semalam, I baked Devil's Food cake (actually I baked it sebab mok suka chocolate cake, but without the ganache). Rina has been very persistent in encouraging me to bake this cake. Pastu masa pegi rumah K.Yani few weeks ago, K.Yani shared this recipe. It's from makcik Martha Stewart book Cupcakes by Shelly Kaldunski . At least kena bagi jugak kat makcik Martha credit sebab recipe tu memang sedap :D

I baked four batches of the cake. Two batches were for mok, and another 2 for today and tomorrow. I think chocolate cake and chocolate ganache didnt go well together, too muak for me. I prefer chocolate frosting macam yang aku buat for Iman's birthday. 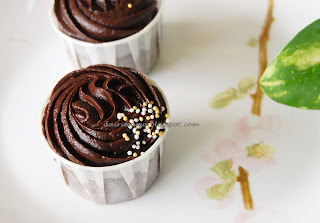