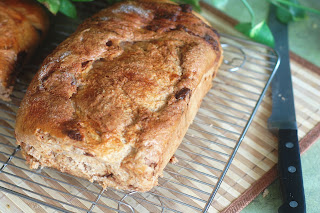 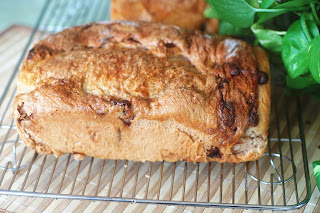 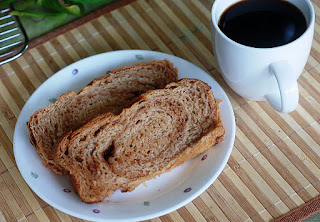 1. Start by making the dough: in a small bowl, mix the warm milk and the yeast with a fork and set aside until foamy, about 5 minutes.

2. In the bowl of an electric mixer, using the paddle attachment, beat the all purpose flour, whole wheat flour, sugar, salt and butter on low speed until butter dissolves into the dry ingredients. Add the yeast mixture and the water and beat on low speed until well combine – the dough should be tacky but not sticky when touched; if the dough is too dry, add water by the tablespoon.

3. Turn the dough onto an unfloured surface and knead until dough pulls together in a ball and becomes less tacky. Knead for 7-9 minutes or until dough is smooth and springy. Pat the dough into a 23cm (9in) round, sprinkle with the chocolate chips (or raisins), and knead briefly to incorporate. Form a ball with the dough, place into a lightly oiled large bowl, turn so both sides are coated, cover with plastic wrap and let rise in a warm place (at least 21°C/70°F) until increased in bulk by 1 ½ times and very soft, 1 to 1 ½ hours.

4. Deflate the dough: using a plastic pastry scraper, turn the top of the dough down and the bottom up. Turn the dough so that the smooth side faces in. cover with plastic wrap again and let rise in a warm place until increased in bulk by 1 ½ times, about 1 hour.

5. Make the filling: in a small bowl, mix the sugar and cinnamon together. Measure out 1/3 cup of the mixture and reserve it separately.

6. Turn the dough onto an unfloured surface, gently stretch it to make a 15x35cm (6x14in) rectangle, then brush with the egg wash. Sprinkle with the cinnamon sugar mixture, allowing 2.5cm (1in) borders at top and bottom. Rolling from the top, roll the loaf as tightly as you can into a log. Gently press the seams together. Place the loaf seam side down in a buttered 21x11cm (8 ½ x4 ½ in) loaf pan.

8. Place the loaf on a baking sheet, put it in the oven and immediately reduce the temperature to 190°C/375°F. bake, rotating about two-thirds of the way through the baking time, until the crust is evenly brown and the loaf sounds hollow when tapped on the bottom (using oven mitts, carefully lift the bread from the pan and gently tap on the bottom with your knuckles), 40-45 minutes. Remove from the oven, unmold onto a wire rack and let cool completely.

9. Brush the cooled loaf with the melted butter and sprinkle with the reserved cinnamon sugar mixture. Place the loaf back on the wire rack and let stand until sugar coating dries, about 30 minutes.
Posted by Sizuka at 6:05:00 PM