What happened when u lost ur baking mojos? A "broken" cake I guess. That was what happened yesterday. Iman ada jamuan hari raya kat sekolah. I was supposed to bake a cake for her the nite before. But I dont have milk, and I was too lazy to go out. So, pagi semalam, aku pun buat ler cake. My heart wasnt really into it. I havent been baking cakes for more than 3 weeks dah. I just lost it.. I cant find my mojos even now..

It was a simple enuff to do cake, the devil food chocolate cake. No matter how limited the time is, I always managed to bake this cake to perfection. But yesterday was a disaster. The cake crumbled when I flipped it on the cooling rack. I guess it resembles how I feel inside. I wanted to cry. Everytime aku bake, my failure percentage has always been almost 0. But not yesterday.

Errk.. Sadly, this year, kita orang lupa nak ambik gambar raya. I did bring back my camera, but I was on a different planet sepanjang cuti raya, and in the end, langsung tak ingat pasal gambar raya. 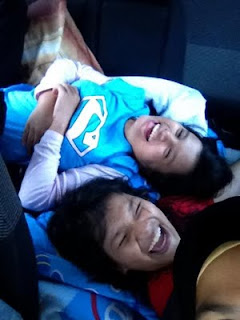 Boleh tak gambar ni aku letak as gambar raya too? Ni on the way back to KL. I love this photo. This is them, on happy days :) 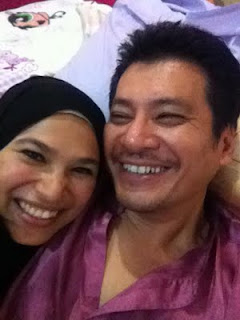 With my BFF, Sally, 25 years of friendship. TQ Azli for the photo :)

After two weeks of MIA, I'm back!! Thank you everyone for the support. I really appreciate it especially the emails, sms-es and calls. Thank you from the bottom of my heart.