A twist in the tale 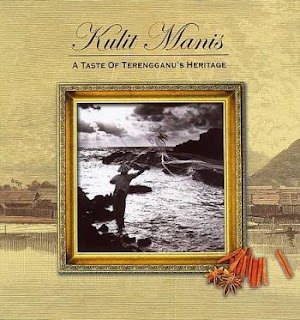 Like many cookbooks, this is a colourful though hefty hardback volume.It also has a title that is derived from food; “kulit manis” literally means “sweet skin” or “sweet bark” and refers to cinnamon, which is a commonly used spice in the cuisine of Terengganu.It is also symbolic of the unity of the close-knit, multi-ethnic community.In homage to this spice, the front cover is subtly graced by a dozen sticks of cinnamon, which are quietly positioned in a corner.

That, though, is where the similarity with other cookbooks ends.Quite surprising for a cookbook, the cover doesn’t feature even a single image of some impossibly well-crafted culinary delight.

Instead, simply and elegantly, it features a centred rustic picture frame displaying a glossy grayscale photograph of a fisherman casting his net into the ocean; this is superimposed upon a background consisting of a simple sketch of a coastal village that stretches across front and back covers.

If you spot Kulit Manis in the cookery aisle in a bookshop, you are likely to think it misplaced and simply skip past it.This is a prime example of why you should never judge a book by its cover, as you would have missed out on a singular and fantastic experience.The title promises “a taste of Terengganu’s heritage”, and it does indeed live up to this statement, featuring a total of 88 traditional recipes, including Terengganu’s famous keropok lekor and laksam.

However, the title is more than just a clever play on words, as much of Terengganu’s non-culinary heritage is also covered.Kulit Manis begins by revealing how Terengganu came to be and how its history links in with the evolution of the local cuisine.It then goes on to speak about Terengganu arts and briefly identifies a few notable personalities.The end of the book is dedicated to describing the singular landscape and natural beauty of Terengganu.

The state’s heritage is mentioned in such detail and scope that were it not for the presence of the recipes, one would never think that this were a cookbook. Just as the synopsis says, the pages are “lavishly illustrated”.

A plethora of pictures – both photographs and drawings – await the reader. Although they are at times overwhelming, you will find that they are as integral to this journey as the written word, conveying what would normally require entire paragraphs through a single image.

This synaesthetic combination of text and pictures is perhaps the closest that one could come to experiencing the state’s culture and cuisine without ever seeing it all in person, or taking a single aromatic whiff or tantalising bite.

Kulit Manis is a warm and inviting read, however, which slowly and gently reels you in.The narrative flows smoothly and is easy to follow; so easy that at times, it feels as though you are casually watching a documentary.

Although ostensibly a cookbook – and indeed, it is marketed as such – I would have to say that it is more a voyage into the heritage and history of Terengganu, with a few meals provided along the way (albeit, meals that you would have to make yourself).

Is this a good cookbook? Absolutely not. In my humble opinion, this is simply not a cookbook.

The recipes, which are often only inserted into a single narrow column along the outer side of a page, appear to be a mere annotation to the centrally positioned main text, which focuses on Terengganu’s heritage in general, with only a minor mention of its cuisine.

They are seemingly thrown in as an afterthought, just as one might abruptly decide to complement a meal with a fine wine.But then, this is, after all, so much more than a cookbook. This book transcends such restrictive labelling and is an insightful guide to Terengganu’s heritage, with a particular focus on food.

If you are looking only for a list of Terengganu recipes and nothing else, you may be disappointed by the numerous non-culinary distractions.Otherwise, Kulit Manis is sure to beckon to anyone who has even the slightest interest in Terengganu, history, culture, or, of course, cuisine.