Believe it or not, this is one of the simplest rice dish to cook and yummiest! Nita, who is currently residing in Adelaide, bercerita pasal this lamb pilaf during Ramadhan few years back. One of the sister yang duduk sana bawak during iftar kat masjid. Aku pun terus menggoogle the recipe and found one kat grouprecipes that according to Nita, quite similar to the one served masa iftar tu.

The first time aku buat this dish was in 2008. Err.. actually, that was the only time aku buat. I had to cook the lamb and rice for almost 4 hours sebab the lamb (aku rasa aku terbeli mutton, not lamb) was very tough. In the end, nasi patah2. But this time, aku beli lamb, bukan mutton. Mutton, according to penjual daging kat pasar, memang liat. Sesuai untuk buat rendang, kerutup or apa2 je yg perlukan utk masak lama. But lamb, on the other hand, lembut sangat, sesuai utk grilling. 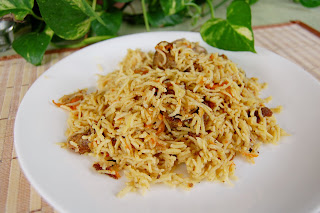 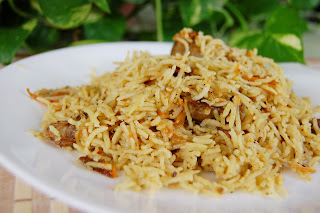 Ingredients
4 cups long grain rice, I use Basmati (Pusa)
4 large carrots - julienne
4 large onions – haf and sliced thinly
2 lbs lamb meat – shoulder with some fat, cut into cubes.
1/4 cup melted lamb fat or vegetable oil
8 cups boiling water – add 1 tbs of salt to it
2 heaping tbsp coarse salt
2 tsp ground black pepper
3 tbsp ground coriander
3 tbsp ground cumin
1/2 tbsp paprika
1/2 tsp turmeric or a pinch of saffron for color
1/2 tbsp tarragon (I didnt add any)
1/4 cup dried barberries (optional)
1 large head of garlic, un-peeled, with the top cut off.
How to make it
1. Rinse rice in cold water at least 7 times, pouring out all the water completely after each rinse; set aside.
2.  If you have fatty lamb pieces use those for melting out the fat, if not, use vegetable oil instead.

In a heavy bottom large pot or dutch oven heat the oil, or brown the fatty lamb pieces to get the fat out over high heat, until fat is smoky (but not burning)
3. Remove the meat now and toss in onions and let it  cook in fat until translucent, about 5-7 minutes, frequently stirring them. Toss in carrots, continue stirring.
4.  Add some of the remaining salt and half of the black pepper and paprika at this point.

Now add it back the meat and sprinkle some of the coriander and cumin over. Stir for another 2-3 minutes.
5. Spread the  rice over the meat, onions and carrots, don't stir.
6. Make a hole in the rice with a handle of a wooden spoon, and pour the boiling water through that hole slowly, taking care not to disturb the bottom ingredients. Water should cover the rice by not more than 1/2 inch. Better under-water it than over-water.
7. Leave the heat at medium. Cover the pot tightly and let rice steam through for about 15 minutes without opening the pot.
8. After 15 minutes toss in the remaining spices and salt. Cover again and keep steaming.
9. Stick the garlic head (exposed side down) into the middle of the steaming plov, about 3/4 way and cover again.
10. Steam for another 10 minutes or so. Check plov once in a while for doneness - the top grains should be slightly firm, and the bottom ones - well done, but not mushy. All water should evaporate, but not burn.


11. Rice should be slightly sticky, but all grains should easily separate and not be easily mashed with a spoon. Meat should be tender and juicy, and vegetables should be all very tender. Enjoy plov with pomegranate salad, if you are up for it
Posted by Sizuka at 7:05:00 AM