Not So Wordy Sunday

I'm having running nose, coughing and sore throat. I guess that's the result of being cooped up in this small hospital room for the past 7 days. At least, the stay is quite bearable now with neighbours come and go. Since Iman kat sini, dah 4 kali tukar neighbour. Dia sorang je yang tak balik2 lagi. When can she go back? I really have no idea.. *sigh*.. 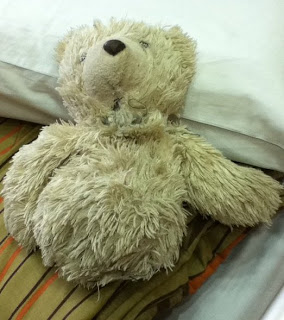 Iman's doudou. Missing legs, stitches all over the body, but still disayangi Iman sepenuh hati.
Yesterday, I received a bad news from an Ausmat friend, Onn. Onn bagitau that our Ausmat friend, Lela, passed away yesterday morning at about 6.30am due to breast cancer. I was shocked, speechless, sadden by the news. It made me realised how precious and fragile life is. Lela as aku remembered her, was someone yang sangat lemah lembut, pakai tudung labuh, always wearing black/brown colours, pakai glasses. I'vent seen her for almost 20 years. The last was, before kita org fly to Australia. And I'll not be able to see her again.
It's a wake up call to me. Aku kena be more proactive dalam mencari kawan2 yang hilang. The truth is, aku dah dengar about Lela being not well since last year, tapi aku tak make any effort to contact her. Padahal she's on facebook. The only time I wrote on her wall was yesterday, after her demise. Sedih kan? Argh! menyesal? yes! menyesal yang amat.
Semoga arway Lela dicucuri rahmat dan tergolong dalam hamba-hamba yang beriman. Al-Fatihah.
Posted by Sizuka at 9:51:00 AM

Email ThisBlogThis!Share to TwitterShare to FacebookShare to Pinterest
Labels: Kids, Me